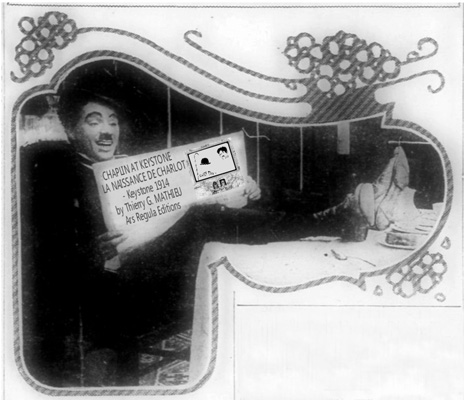 Thierry Georges Mathieu met Charlot thirty years ago, and has never left him. He has seen everything and read everything about his hero, particularly the birth of his hero. Long before most researchers, he made a full assessment of the immense paradox that characterizes the early works of Chaplin: for a century, the thirty-five films of the Keystone series (we have recently identified a thirty-sixth) are usually visible only in extremely worn and mutilated copies that had very little resemblance to the works projected in 1914: if one could eventually follow the genesis of the character and see in it the development of Chaplin's comic art, it was impossible to fully appreciate it as the genius of the creator or as his creation. As for Chaplin talented filmmaker, recognizable from the first short films and who finally shines through with Caught in the Rain (the fourteenth film in the series), it was simply impossible to see him, much less appreciate his work in the dismal prints projected in theaters or marketed (in the greatest disarray) in 16mm or sup-8, VHS or DVD.

Thierry G. Mathieu was one of the first to make this observation. But he was the first to really want to fix it. With patience combined with passion, he devoted all his spare time to accumulating what is today one of the most comprehensive documentations on the films in the world for the year 1914  ? including an impressive film library, with all media and formats represented. He exchanged correspondence with the best specialists in the world, attended most important retrospectives and followed all publications and all academic works on the subject.

The culmination of this huge documentary work was, in 1999, the publication of the first issue of the periodic journal The Birth of Charlot : Keystone – 1914 (Chaplin at Keystone) printed by a local publisher, Ars Regula. His twenty-fifth volume ? the lastest one to date ? appeared sixteen years later, in March 2015.

The preface to Issue #1 already reflected the extraordinary erudition of its author. T.G. Mathieu begins by providing all the necessary explanations about the nature and causes of alterations of copies still availables. He explains in a scholarly but clear way the problems resulting from the cuts, the re-edits, the aspect ratios, the frame speeds, the completenesses, the picture qualities, the intertitles and the musical scores. The many manipulations and mutilations demonstrate the indifference that prevailed until recently to the original works. Mathieu paints also a very complete picture of the industrial, artistic and biographical context in which the Keystone films emerged. Finally, he presents the idea and methodology that he will use to produce, with steady hand, the twenty-five editions The Birth of Charlot ? Keystone 1914 (Chaplin at Keystone).

Before Mathieu, only publisher Francesco Savio in Italy and Harry M. Geduld in the United States showed an interest in reconstructing (on paper) original edits of the thirty-five known films in the series, and only on the basis of a few random viewings. Mathieu embarked on in the same effort in 1999, but with unprecedented ambition of comprehensiveness, with the aim of consulting all copies in circulation, across all audiovisual film media. After careful analysis of these sources, he sought to reconstruct, shot by shot, the best possible edit for each film, that is to say the closest continuity scripts of the first copies released in the United States and the world in 1914. For “in most cases, only the addition of these various versions allows a precise chronology of the shot after shot editing of the film that approximates the best of the integral original work.”  The effort undertaken is enormous, especially as each issue of the magazine (usually devoted to one or two films), adds to this the ideal edit (labeled “Z”), all the technical data available on the 1914 release and its later reissues, a “general discussion” on the context and circumstances of each film (where Chaplin achieves this “clever intermingling of past lessons and new influences” ? p.40 ? that allows him to find his style) and a very complete set of critical comments gleaned from the best writing on the subject.

There is no doubt that the “reconstructed versions” by T.G. Mathieu are the most reliable available today, as no other study in the world can equal their thoroughness and erudition. The splendid restorations in 2005 by the Cineteca di Bologna (in association with the BFI and Lobster Films), now available on DVD, some of which are also much in debt to the work of Mathieu (I think notably of Tillie's Punctured Romance), were primarily concerned with restoring the photographic beauty of original films. They were less demanding on the completeness of shots, on the chronology of the edits, or even on projection speed. Mathieu paints a clear picture of their merits and their defects in the issue 22 of his magazine, reviewing in detail each of the thirty-six restorations. He takes the opportunity to update his previous editions, on the basis of other recently found documents and prints since their first publication. And then he adds some exciting chapters and completely new features (like the one on the Keystone players in n°24), in which he brings much new information ? and incidentally corrects mistakes that had lasted for decades ? including some by the most noted Chaplin experts. His inclusion of the “Peggy Paige record ” (“The Keystoners” p.283) is an example of investigative model.

It should be added that his criticism of the Bologna restorations reflects a perfect objectivity. Mathieu is the first to acknowledge the overall success of this work. Thus, he notes about Making a Living  “The neat light and balanced contrasts, sharpness of the picture revealing previously unknown details, particularly in the background, bring to life the first Chaplin film at the Mack Sennett’s Keystone Studio. A very nice copy in short, and undeniably the best at this level at this time.” (p.69). Nevertheless, our author must note that the film is a bit incomplete and the projection speed of the 35mm print was far too fast at Bologna Festival, and it is “still inadequate” (22 frames per second instead of 18) on the DVD edition release by Lobster Films.

Tougher but no less relevant, comments on the restoration of His New Profession show that the work of T.G. Mathieu remain the standard against which we must continue to evaluate the releases of the first Chaplin's shorts. “Not very serious”, he commented about the large number of cuts and mistakes in the editing of this film. Because again, the picture is beautiful, and it is perfectly understood that was given priority, but at what price?  Mathieu agrees that the restoration is “beautiful”, but he does not hesitate to add that “it needs to be redone.” (n°25, p.246).

Few critical works, academic or otherwise, equal The Birth of Charlot (Chaplin at Keystone) in the volume of information and reflection therein assembled. This is an invaluable tool for all researchers interested in Chaplin's first appearances and directorial efforts. This review remains an indispensable companion to the Chaplin Project restorations (35mm and DVD) because of the greater rigor and incomparable erudition used to appraise and perhaps one day will be used improve them. As such, Thierry G. Mathieu's works constitute a decisive contribution to chapliniennes studies.